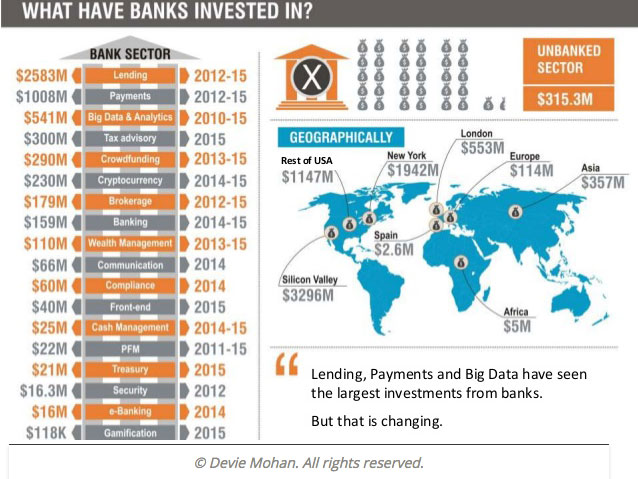 Earlier this week, I spoke at Next Bank Europe in Barcelona on ‘Digital Banks and Startups’, and how they can work together to innovate faster. I felt the topic would be appropriate for the audience there: a unique mix of fintech entrepreneurs and digital banking heads, all worried about finding scalable innovation, a quicker path to profitability and making a substantial impact on the fintech market while at it.

We have seen that banks have been much quicker to invest in early stage fintech startups than venture capitalists, but fintech startups have had much more success selling their offerings in the mass market than to banks. This dichotomy was worth exploring:

Lending, payments, big data & analytics are the three major areas of investment by banks (these also happen to be the earliest areas of investment). The investments made into firms such as FastPay and OnDeck in the early days were seen as supportive of innovation, but without any plans to integrate the offerings immediately into the bank’s banking systems or product portfolio. However, with reasonably heavy investments in 2015 into firms such as Stockfuse (that attempts to develop consumer trading behavior) and MX Technologies (that provides omni-banking across silos in banks), banks are exhibiting an immediate desire to change. The fintech firms are putting more pressure on banks to innovate and launch customer-centric offerings, and investing is one way the banks have responded to the increased pressure.

The US still leads the way with investments – banks in the region have invested over $6bn. London and Europe have seen less than $1bn in investments so far, but are closing in on the US with some recent VC and bank-led investments in multiple sectors.

The banks’ incubator programs have created some of the most successful fintech startups. Not all of them have directly helped the banks themselves, but have helped the banks explore the latest technologies and learn what works best in the market. Most of the fintech startups that were present at Next Bank Europe for the BBVA OpenTalent Europe Finals were revolutionary.

Data shows that lending and big data were the favorite sectors for incubator programmes in 2014, and for this year – yes, you guessed right – several sectors have seen an almost equal amount of interest. Even lending has its own sub-sectors, with a high degree of interest from banks in small business lending and invoice financing. The winners of the BBVA OpenTalent Europe contest, EverLedger and Origin Markets, both had their eyes on a clear market, and intuitively created solutions to support the respective markets. EverLedger uses blockchain to combat fraud (combining two of the hottest sectors in fintech today), and Origin offers a marketplace for corporate bond issuance – both areas of high interest from banks.

This is the interesting way in which banks ‘plug up’ gaps with the help of fintech firms. Open banking and the availability of APIs have the potential to contribute to a full day of discussion (I won’t attempt it until the market takes a stance!), but there are interesting examples. Tryum, a personalized relationship science company, received the Pingit Payments APIs from Barclays, and Namu (a white label mobile banking app) received front-end APIs from Citibank through their respective incubator programs. Both of these firms have used the experience of working closely with banks to innovate quickly, and to develop solutions that immediately appeal to the financial services world. 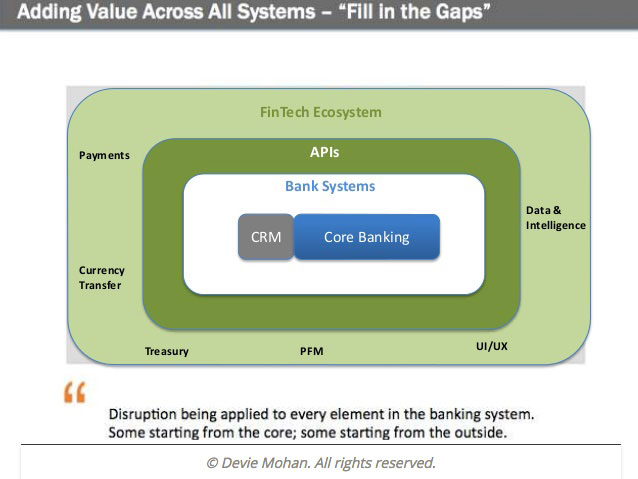 What to watch out for

The trends are singing a wonderful song. The next few years will be when banks invest significantly in fintech startups who can quickly help improve their offerings.

Gamification will be one of the most dramatically different ways of improving customer interactivity, and thus, customer-centricity and satisfaction. Loyalty, derived through this improved focus on customer-centricity, will be very important as traditional banks are faced with challenger banks and competition from alternative business models.

Banks will also launch a wider base of customer touchpoints, so that customers have more opportunities for interaction within the relationship. Banks could be seen offering business units around remittances, currency transfer, peer-to-peer lending and tax advisory services.

Customer advisory services will become heavily data-, analytics- and machine-learning-dependent, while also becoming simpler and more intuitive at the app level. From my conversations with traditional banks of all sizes, security is bound to be an area of increased focus for the year.

No one can predict the future. Banks’ investments vary between short-term and long-term investments, as well as tactical and futuristic ones. There are different strategies being adopted by banks and VCs today, and it’s all because there’s no singular path out there.